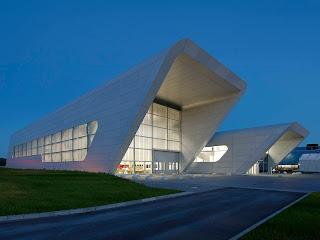 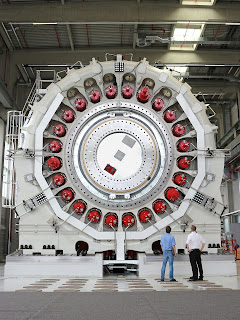 The technologically innovative Sven Wingquist Test Center has been awarded the highly-regarded design prize, in the ‘industrial’ category. SKF is proud to have won a Design Award for its Sven Wingquist Test Center at The International Architecture Awards, a competition that recognises outstanding architectural achievements from across the globe. With over 1,000 entries from across 31 countries, the awards are globally recognised as a high accolade for any company. The awards took place in Athens, Greece and the judges complemented SKF on the uniqueness of the design of the test center, its effect on the users and visitors of the building, as well as the extraordinary correlation between the purpose of the center and its representation in the architectural implementation. The pioneering facility, based in Schweinfurt, Germany is used by SKF for large-scale bearing testing. It was designed by architects Tchoban Voss based in Hamburg. Frank Focke, Associate Partner at the company said: “It fills us with pride that we were able to help this unique facility achieve a globally recognised design. This is where, among other things, large-size bearings for wind turbines are tested and that is why we have chosen a strikingly slanted, literally warped form as the basic architectural motif. In addition, this dynamic design also indicates the forces being unleashed in the interior of the building.” Two new test rigs in the belly of the twin building can dynamically apply forces to huge bearings in all directions. These combined forces are many times higher than those of comparable facilities and also permit significantly higher test speeds than previously possible. "This ensures very fast test cycles, which ultimately saves energy," reports Dr. Martin Göbel, Manager Global Testing at SKF. "In addition, the findings from the tests will enable us to produce optimised generations of large-size bearings much more efficiently and resource-friendly in the future." A strong sense of sustainability is echoed throughout the ultra-modern building. For example, in the selection of acoustic wall cladding and ceiling mirrors, as well as in the lighting concept and numerous other equipment details. In addition, waste heat from the test facility is used for heat recovery in the building itself as well as for an adjacent SKF large-size bearing factory. In view of this comprehensive implementation of sustainable building technology concepts, the Sven Wingquist Test Center boasts a "Leadership in Energy and Environmental Design" Gold Certificate. This is a sustainability certification used worldwide and introduced by the U.S. Green Building Council to classify "ecological buildings". The International Architecture Awards were presented by the Chicago Athenaeum: Museum of Architecture and Design and the European Centre for Architecture Art Design and Urban Studies. SKF is a leading global supplier of bearings, seals, mechatronics, lubrication systems, and services which include technical support, maintenance and reliability services, engineering consulting and training. SKF is represented in more than 130 countries and has around 17,000 distributor locations worldwide. Annual sales in 2017 were SEK 77 938 million and the number of employees was 45 678. www.skf.com ® SKF is a registered trademark of the SKF Group.