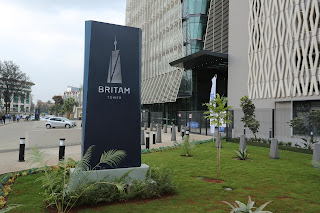 7th February, Nairobi:Britam Tower has received the Emporis Skyscraper Award, becoming the only skyscraper in Africa to feature among the top ten buildings in the world, in the Award’s nine-year history. The Emporis Skyscraper Award is the world’s most renowned prize for high-rise architecture. Winners are chosen by a jury of architecture experts from all over the world, while the nominated buildings are judged based on their achievements in functions and aesthetics. The Iconic Tower, developed by Britam Properties Limited, is currently the tallest building in East and Central Africa, rising from Nairobi’s skyline at 200 meters, and is Britam’s flagship project for its property strategy. Located in the upmarket Upperhill area, the 31-storey skyscraper offers panoramic and breathtaking views of the capital and surrounding areas, like the Nairobi National Park. On clear days, both Mount Kenya and Mount Kilimanjaro can be seen from thetop of this cutting edge building. Commenting on what inspired the design and architectural concept of the skyscraper, Traid Architects stated, “Britam Tower is the international headquarters of Britam Holdings Plc. It also serves as the regional headquarters of the business conglomerate in East and Central Africa, so the client wanted a multitenanted iconic office building that embodied the qualities of strength and stability, being timeless and ageing gracefully, to be an inspirational and environmentally responsible place, both inside and out. The building had to make sound commercial sense to the investor and tenants alike and add value to the precinct in which it is situated”. Announcing the awards, Emporis,a leading database of information about building and construction projects, based in Germany, stated that Britam Tower was the first skyscraper in Africa to feature among the winners since its inception in 2000. “Britam Tower by GAPP Architects and Triad Architects was the first skyscraper in Africa to feature in the top ten Emporis Skyscraper Award’s list. It made its way to the tenth position among other outstanding skyscrapers in the world,” Emporis said in a statement. Architecture The BritamTower was assessed among other buildings in Europe, Asia and the United States that includedGenerali Tower in Milan, Chicago’s 150 North Riverside and Riverpoint. The top spot went to the Lotte World Tower in Seoul, South Korea. “Triad Architects takes pride in leading the design and construction processes of Britam Tower. The firm continues to design award winning buildings in Africa. Ourapproach is to design creative and unique spaces that meet current international standards and are infused with an elegant local flair. We are proud to be associated with this prestigious list of outstanding skyscrapers,” the firm said in a statement. Completed in November 2017, Britam Tower is owned by Britam Life Assurance Limited and was developed by Britam Properties, a fully owned subsidiary of Britam Holdings Limited. The ultra-modern tower has a total lettable space of 350,000 square feet with 1,000 parking bays achieving one of the highest parking ratios in Nairobi, that meetsinternational standards. Letting of space in this Class A building is ongoing and has attracted international organizations. It comprises of two separate buildings, one is the 31-storey office tower and the other a 12-storey parking silo. The two buildings are linked on the ground floor as well as by a bridge at the tenthlevel of the parkingsilo, that providesan alternative means of evacuation of the tower during emergency situations. Green Building The Tower adheres to international green building standards, with several green features, including rain water harvesting, water recycling and reuse facilities, use of water and energy saving sanitary and light fixtures besides being designed for natural ventilation and daylight. The tower complies with international fire safety standards. As a result, Britam Tower was presented with the EDGE (Excellence in Design for Greater Efficiencies) in 2018, by the International Finance Corporation (IFC). The award recognizes and rewards developers who implement strategies to save energy and water use in their building. Britam embarked on its property and real estate strategy in 2011, as part of the Group’s diversification strategy to provide real estate exposure to investing clients, by taking advantage of the thriving property sector in Kenya.