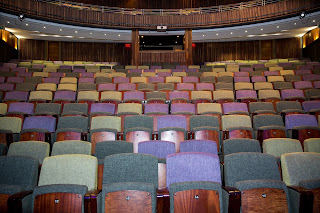 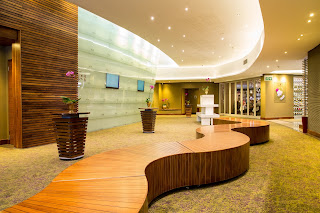 The Atterbury Theatre has undergone a major revamp after almost eight successful years and 2,450 performances, productions and features enjoyed by some 731,630 people. The new Atterbury Theatre opened on Friday, 1 February, with a sold-out launch celebration featuring Karen Zoid and her band, complete with sparkling wine and surprises. Atterbury Theatre is an investment of the Atterbury Trust, which was set up 25-years ago when Atterbury Property was founded in 1994 and includes culture as one its focus areas. “The upgrade builds upon the continuous innovation and improvement that has become synonymous with the theatre,” says Zahn Hulme, Executive Trustee of Atterbury Trust, which is responsible for the upgrade of the popular Atterbury Theatre. The upgrade has given the theatre’s interior a vibrant new colour palette and a brand-new carpet, designed specifically for the theatre. Its 400 chairs have been reupholstered and are covered in three new colours. The new theatre seating also creates more leg space for theatregoers. The sound room has been transformed to include optimal sound engineering facilities. The theatre’s foyer is now bigger, allowing more space for conferencing and events, and more room around its bar area. Inside the foyer, three new artists will join those already honoured in the theatre. Karen Zoid, Coenie de Villiers and Steve Hofmeyr will join the line-up of significant Afrikaans artists already featured. “The theatre has enjoyed too many highlights to mention, but every artist and person from the public has made the Atterbury Theatre what it is today. It has hosted great performances, sound recordings, DVD recordings, phenomenal features, ballet, corporate events, competitions and launch events,” says Theatre Manager Paulette Reyneke. “The theatre’s variety is incredible and the upgrade will only improve it.” The upgrade also goes beyond cosmetic changes to include a new booking system - iTickets. “Atterbury Theatre is very excited about its future with this exciting and easy-to-use online booking system. Tickets for all shows will be on sale on iTickets,” advises Reyneke. Another exciting initiative launched in collaboration with the Atterbury Theatre and the Atterbury Trust is Optog! 2019. With Nataniël as the face of Optog!, more than 60 musical and theatre productions in 40 venues across South Africa and Namibia, featuring some of South Africa’s leading artists,will kick off in February. Performers such as Laurika Rauch, Nataniël, Coenie de Viliiers, Jo Black, Stef Bos and many more form part of this project that is set to take the country by storm.