Express Highway, a 28km bridge, to link JKIA to Kangemi 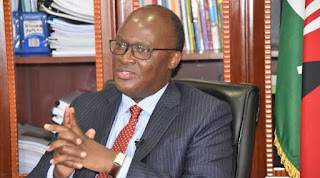 Transport Secretary James Macharia. Plans are underway to build a 28-kilometre highway bridge connecting Jomo Kenyatta International Airport (JKIA) with Kangemi market on the Nairobi-Nakuru highway as the government seeks to tackle traffic congestion in the Kenyan capital city. According to Transport Secretary James Macharia, a team of engineers are currently undertaking soil tests at JKIA to help inform the final design of the massive overpass. “Right now, we have engineers who are testing the soil at JKIA. It is no longer mere talks. We have done the bypasses around the city of Nairobi, we have done the Southern, Eastern and Northern bypasses and about a month ago we signed for Western bypass,” Mr Macharia said Tuesday in Mombasa during the groundbreaking ceremony for the upgrade of Moi International Airport. The 28-kilometre bridge, which will be known as Express Highway, is seen as a means to ease congestion at the JKIA – a key problem that the government is seeking to tackle. “You land at JKIA and it takes you another two hours to get to the city. It is important to facilitate easy travel for the tourists coming to Nairobi especially for tourism conferences,” he said. READ: JKIA-Rironi highway to cost Sh21bn more due to design change Express Highway is expected to stem the problem of passengers missing flights at JKIA due to perennial traffic congestion on Mombasa Road. The project comes nearly a year after the Kenya National Highways Authority (KeNHA) dropped an earlier plan to build a Sh38 billion double decker road above Uhuru Highway in favour of a new design that includes flyovers and underpasses on sections of the 43.5km JKIA-Rironi highway. The new highway, estimated to cost Sh59 billion, will be completed in three stages starting with phase one (6.5km) which runs from JKIA to Likoni Road and the Southern bypass interchange. The segment will cost Sh8 billion, which will be provided by the African Development Bank.