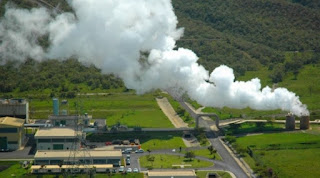 Construction of Kengen’s Olkaria 5 geothermal power plant in Naivasha is making continued progress as the project is now 75 percent complete, chief executive Rebecca Miano has said. Crews have finished the assembly of a powerhouse crane and specialised hoisting system onto which generators will be loaded – signaling the imminent completion of the Olkaria V plant. Last week, two generator units – each weighing 130 metric tonnes – left the port of Mombasa for Olkaria in Naivasha. The generators will be loaded onto a 9-metre-high reinforced concrete platform (deck) using a specialised mobile hoist supplied by a sub-contracted firm from the UK. The lifting and placing of each generator unit will take about three days with preparations before hoisting arrival for each unit taking a minimum of a week. The contractor has already delivered turbine casing and condenser units at the project site. Dubbed OlKaria V Geothermal Power Plant, the 165.4 megawatt (MW) facility that has been under construction since January 2017 is expected be commissioned in July next year. A consortium of Mitsubishi Corporation, Mitsubishi Hitachi Power Systems Ltd and H-Young & Company E.A Limited is undertaking construction of the two-unit plant. The Olkaria V geothermal plant will enhance existing power facilities in the Olkaria geothermal fields with the aim of easing the struggling power supplies in the country. The project is being undertaken with an Official Development Assistance (ODA) loan arrangement, extended to KenGen by the Japan International Cooperation Agency (Jica). In March last year, Kengen said it had picked a consortium of Mitsubishi Corporation & Mitsubishi Hitachi Power Systems (MHPS) and H Young & Co. to deliver engineering, procurement and construction services, turbines and technical equipment for the construction of the Olkaria V power project. MHPS was tasked with the design of the geothermal plant, as well as the delivery of generators, condensers, steam turbines and other key auxiliaries. The company was also to dispatch technical consultants to assist H Young & Co. with proficiency in installation and commissioning. KenGen plans to develop an additional 743MW of energy by 2022: 653MW geothermal power and 73MW of wind power. The company’s current installed capacity stands at 1,631MW.