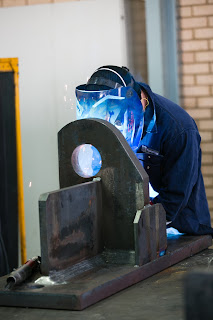 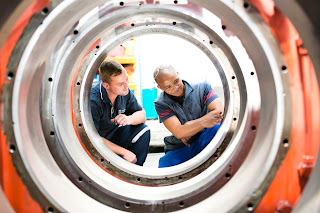 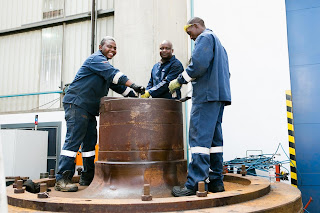 thyssenkrupp Technical Apprenticeship Programmes are successfully developing people to secure a sustainable future not only for the company, but also for southern African industry and the regions in which thyssenkrupp is operating. “We are very happy to contribute to the development of skills in South Africa with this programme and are proud to see the fantastic results our apprentices have achieved,“ says Philipp Nellessen, CEO of thyssenkrupp Industrial Solutions Sub-Sahara Africa. “In developing technical competent employees for the future, our programmes are part of the solution in meeting the challenges of unemployment and skills shortages facing South Africa. Successful apprentices are armed with thyssenkrupp plant and equipment knowledge enabling them to provide engineering and technical support to our Field Services, Site Teams, O&M Contracts as well as the Service Centre workshops.“ Nellessen concludes. “Upliftment through skills development and job creation are the beacons that inspired our decision to embark on this Technical Apprenticeship Programme initiative in 2010,” says Chris Bouwer, Technical Training Manager at thyssenkrupp Service Centre. The fully accredited Technical Apprenticeship Programme is in line with merSETA (South Africa’s Manufacturing, Engineering and Related Services SETA National Skills Development Strategy) which was created to facilitate skills development, education and training in a number of local sectors including metal and engineering. Furthermore, the programme is first-world aligned, drawing from thyssenkrupp’s vast global knowledge pool, expertise and experience forged over more than a century. The Commercial Apprentice Training Scheme Program run in partnership with the Sourh African Germain Chamber is also aligned with South African and European standards. The candidates within this program are awarded a South African and a European certificate upon completion. Eligible male and female candidates for the programme must be 18 years of age with an entry level matric with Maths and Science or a minimum N3 qualification with Maths and Science. “Our aim is to train apprentices for our own requirements as well as for placing these skilled artisans into the market place. Strict pre-employment screening which includes a Dover battery test to determine technical aptitude is therefore a prerequisite for eligibility,” notes Bouwer. The top fifteen candidates who are picked from the pre-employment screening are put through a rigorous six weeks hands-on training programme. This involves a three week basic hand and power tools course that involves both theoretical and practical applications, followed by a further three weeks in the workshop. From this group the most suitable top eight candidates are then selected to participate in the formal Technical Apprenticeship Programme. Bouwer reports that the programme has delivered many positive results. Jack Ledwaba and Hannes Pretorius who qualified in 2010 and 2011 respectively as well Hendrik Nthloiseng, who attended the Colliery Training Centre, have had a major impact in the Service Centre workshop, bearing testament to the success of the programme. Bouwer adds that their work ethic and conduct are very well developed and they are some of the best artisans in their current environment. Of the seven qualified apprentices in 2015, three have been employed permanently at the Service Centre; they were employed as fitters on the site team while one worked for the workshop as fitter on a contract basis until December 2015. One of the third year (2015 Sept intake) female Fitter apprentices, Promise Ntuli was nominated as the best Fitter apprentice in her group at Colliery Training College in Witbank. And two of the first year (2016 Sept intake) apprentice artisans received rewards; Elijah Ntsienne who is working as a turner apprentice in the machine shop received an award from Artisan Training Institue as best turner apprentice and Cynthia Makofane working as a fitter apprentice in the assembly workshop received an award as best Fitter apprentice in her group from Colliery Training College. “We are very proud of these students and it is a testimony to the effort being put in to develop our apprentices to the best of their abilities.” “We have had 3 new intakes from September 2015, and from the first intake we had five students who recently went for trade test and four passed the first time. I have to mention that one student passed in the midst of great tradegy. On the morning of his trade test he received news that his mother had died, and he passed his trade test with flying colours.” “Frekkie Kgosanna is a testament to the character of the young men and woman that enter our program, and we salute the young man for pushing through to attain his qualification. Willie Potgieter who manages the Apprentice Training program supports the students where ever he can and has made a great impact on the lives the apprentices within the program at tkissa. Whenever the apprentices has a problem they run to Oom Willie, and he always does his best to assist them and to ‘help out’.” The programme arms apprentices with advanced skill sets enabling them to start their careers in higher positions within the Service Centre where they enjoy good status. They are included in meetings and customer site visits and are given the opportunity to make suggestions and raise issues with management. The Service Centre has also introduced a skills rotation programme to meet these highly motivated apprentices’ request to move between different jobs so that they can broaden their skills and knowledge base. “We have also received reports from artisans employed by other companies that the programme is making it easier to find employment. By upskilling people, these programmes provide more than a job and an income, they provide the artisans with a career and a sustainable future. You have to be willing to walk the extra mile in developing these young adults, showing them the possibilities that lies locked up within them. The same boiling hot water that softens patatoes are the same boiling hot water that hardens an egg, it is what you make of life that sets you apart as a person,” concludes Bouwer.