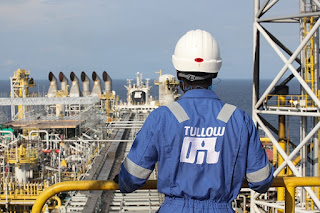 Operations at Kenya’s oilfield in Turkana County have come to a standstill after residents’ protests disrupted the transportation of oil to Mombasa, said Tullow Oil’s chief executive yesterday. Tullow Oil has, therefore, halted the early oil pilot scheme and works at the site due to protests and insecurity, a decision that could delay plans to produce first oil by 2021. Under the scheme, trucks have been transporting about 600 barrels of oil every day to Mombasa before a pipeline is constructed. The pipeline is expected to be operational by 2022. Protests Over Insecurity The local community has been protesting insecurity in the area where banditry and cattle rustling are common. The residents now want the government to deploy more security forces in the region arguing that if their safety is not guaranteed, the safety of the oil being transported can be compromised as well. Tullow Oil’s chief executive Paul McDade said: “What you saw locally was the local people, the community […] using the trucking operation as a lever really to demonstrate to the national government that the security situation on the ground had to improve.” “We would expect to be up there working, getting the field back operating again and trucks moving again in the near future. But it is important to take the time out so that when we do return […] we have a more secure environment,” he added. The company said last week the protests could have cost it nearly Sh200 million as it pays for the leased equipment at the oilfield. The company also said it would close down the site because essentials were depleting. Tullow aims to produce a minimum of 100,000 barrels of oil equivalent each day after first oil in 2021/22. In addition, the company is mulling over decreasing its stake in the project from 50 per cent to about 30 per cent before the final investment decision scheduled for late 2019.