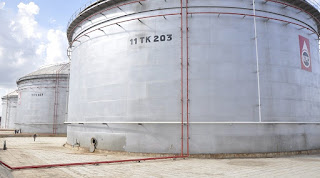 The Kenya Pipeline Company says construction of the Ksh 5.3 billion storage tanks that will be used to facilitate new Mombasa-Nairobi pipeline is complete. The tanks will provide receipt of higher volumes of diesel and super petrol products. The storage tanks with a capacity of 133 million litres have more than doubled the storage capacity of diesel and super petrol from the current 100 million litres to 233 million litres effectively providing sufficient capacity for receipt of higher volumes of product through the new Line 5. The new 20-inch pipeline will ensure sustained, reliable and efficient transportation of petroleum products in the region over the next three decades. “Besides guaranteeing security of supply of petroleum products, the new tanks will also enhance operational flexibility and increase tank turnaround at Kipevu resulting in more ullage creation at KOSF and reduction of demurrage charges,” says Joe Sang KPC Managing Director. While inspecting the new tanks last week, Cabinet Secretary for Petroleum and Mining John Munyes said that the new tanks will increase KPC’s overall storage space by more than 20 percent from the current capacity of 612.3 million litres to 745 million litres. “KPC has in essence addressed the problem of insufficient ullage, which limited economies of scale as far as petroleum supply logistics is concerned. We are talking of a bright future in national and regional petroleum trade,” said Munyes. Construction of the tanks, located at KPC’s Nairobi Terminal, commenced in November 2014 following the award of the contract to Prashanth Projects Ltd (PPL).