Construction of Thika Road Footbridges to End by December 2018 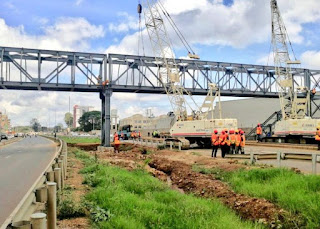 The ongoing construction of the four footbridges along Thika Highway will be complete by December 2018 according to KeNHA’s assistant director for communication Charles Njogu. Once the construction is complete, the Kenya National Highways Authority (KeNHA) will get rid of all the speed bumps at the four locations to speed up traffic flow and improve pedestrian safety. Interways Works Limited has been contracted to construct the Witeithie and Mang’u footbridges at a cost of $4.3 million while FourWay Construction Limited will install the Garden City and Survey of Kenya footbridges at a cost of $3.9 million. The construction of the four footbridges began in May. Additional Infrastructure KeNHA will also build a bus stop, mini stalls, and public toilets that the contractor overseeing the maintenance of the highway will take charge of. KeNHA is mulling over floating an infrastructure bond through public-private partnerships (PPPs) and concessions of targeted roads in order to reduce infrastructure costs. Presently, transport costs make up 30 per cent of the cost of goods and services across the region thanks to” poor infrastructure and the thousands of man-hours lost in traffic” each day. Infrastructure Principal Secretary Eng. John Mosonik stated: “These projects will not only greatly cut down costs for motorists in terms of fuel savings, lost man hours and car maintenance costs, but will also be expected to greatly spur economic activity along the corridors they pass, in a similar fashion to what Nairobi-Thika Road has done.” Thika Highway has 18 footbridges while ten others are designed but yet to be installed due to inadequate funds.