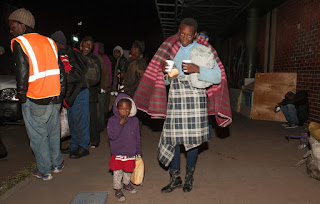 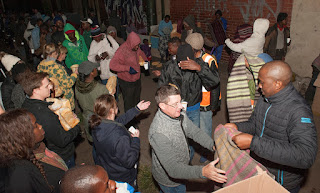 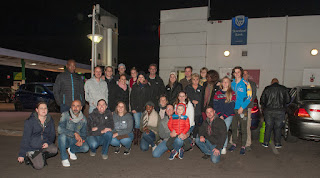 Atlas Copco Industrial partnered with Paballo Ya Batho, a non-profit organisation, to donate blankets to the homeless in Johannesburg City on 13 June 2018. Paballo Ya Batho, which means Caring for People, is a non-profit organisation that provides soup and bread every Wednesday evening to the homeless men, women and children in Johannesburg’s CBD. Atlas Copco first worked together with Paballo Ya Batho in 2017 when Tokologo Ndlovu, approached Atlas Copco with a request to partner with them in a pop up store initiative where Atlas Copco handed out clothing donated by employees as well as food parcels to every needy person who arrived at the store. The winter season in Gauteng is well known for its freezing temperatures and icy winds and is without any doubt a very difficult and uncomfortable time for the homeless. Atlas Copco is a compassionate company that involves itself with numerous initiatives to assist where there is great need. This year Atlas Copco decided to do a blanket drive instead of clothes. Having kept Tokologo’s contact details, Bongani Ndlovu, Atlas Copco CSR Manager and Executive Assistant, called her to enquire about the winter projects that Paballo Ya Batho were busy with. “It so happened that they were also involved with a blanket drive and once again welcomed the opportunity to work with us,” says Bongani. “This was the start of a most heart-warming initiative.” Noluthando Zondo, Atlas Copco Communications Professional, got the ball rolling by sending out a communication to all employees requesting the donation of blankets. Atlas Copco employees opened their hearts and a load of blankets were collected. On the chilly winter morning of 13 June, Bongani, together with Paballo Ya Batho volunteers, gathered at the meeting point at the BP Garage in Empire Road for a short briefing session. They then eagerly proceeded to Newtown, a couple of streets from the Market theatre where most of the homeless people reside, and began handing out blankets. “We actually ended up handing out only 20 blankets from Atlas Copco as Paballo Ya Batho had happily managed to achieve their target of collecting 400 blankets!,” says Bongani. He adds, “It was tremendously rewarding to see the joy on the faces of the people who were so grateful to receive a blanket.” Thanks to the time and effort of all those involved, as well as the strong collaboration between Atlas Copco and Paballo Ya Batho, the drive was a great success. “Atlas Copco is proud to have participated in this worthy cause and we hope that the blankets will help provide some comfort and warmth to some of the homeless on the streets of Johannesburg this winter,” concludes Group Human Resources Manager for Atlas Copco, Wendy Buffa-Pace.