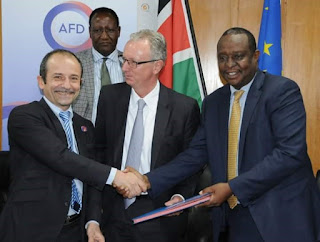 Kenya has received a credit facility of $147 million from the French Development Agency (AFD) to construct Kwale County’s Mwache Multi-Purpose Dam. The construction of the dam aims to provide water to Kwale and Mombasa county residents, rehabilitate the Mwache catchment, and improve sanitation. The construction of the dam is expected to be complete in three years. Project Financing The cabinet secretary of the Treasury Henry Rotich said the facility, which will be repaid in 20 years, will attract an interest rate of 1.46 per cent each year. The facility has a grace period of eight years. The Treasury also signed a credit facility deal for the Meru wind farm project with the AFD and two statement letters to support the execution of the public finance management reforms at a cost of $36 million and “in support of the electricity transmission network at a cost of $112 million.” Kenya’s Debt Problem With the rising number of projects that Kenya is undertaking, the debt situation continues to worry some while others insist there is no need for concern just yet. According to Samantha Singh Barclays Africa Senior Economist, there is no reason for concern at this point; however, the country should put efforts towards raising revenue to repay the debt. The government has shown initiative to reduce the debt level by planning to use over half the country’s domestic revenue to repay maturing debts such as 2014’s Eurobond of $22 million as CS Rotich mentioned during his budget speech.