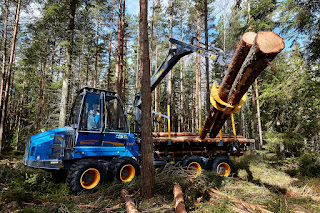 South Africa‘s plantation area covers more than 1.5 million hectares, stretching over five provinces - Limpopo, Mpumalanga, KwaZulu-Natal, the Eastern and Western Cape. “With the forestry industry in the summer rainfall areas nearing the fire season, forestry machinery not fitted with a fire suppression system will be at high risk,” warns John Russell, General Manager of Fogmaker South Africa, industry leading supplier of high pressure, water mist fire suppression systems. All diesel engine-operated machinery presents a fire risk and forestry equipment is certainly no exception. The accumulation of organic material within the hot engine compartment,hydraulic pipe failure and electrical faults are the most common causes of fire in these machines, putting billions of Rands of forests at risk. “Unsurprisingly, there is a growing demand for automatic fire detection and fire suppression systems within the forestry industry,” notes Russell. “Driven by a proactive stance taken by two of South Africa’s leading forest owners, it will soon become compulsory for all new forest machines of a certain criteria to be fitted with a fire suppression system.” Russell adds that the retrofitting of fire suppression systems to used machinery is also expected to become a prerequisite in the not-too-distant future. Numerous smart OEMs and forestry contractors who have already equipped their forestry machines with the Fogmaker high-pressure water mist fire suppression system have peace of mind, assured in the knowledge that not only are people, animals, the environment as well as capital equipment protected but that the risk of downtime and subsequent loss of production is also minimised. Designed specifically for engine compartments, Fogmaker can be installed on virtually all forestry machines including hybrid harvesters, skidders, haulers, loaders, as well as hauler loaders and can even be fitted to bakkies. “We work closely with Original Equipment Manufacturers (OEM) suppliers and integrators and we are proud to announce that Fogmaker is the standard OEM fire suppression system on the AHWI mulcher,” confirms Russell. Equipped with automatic hydro-pneumatic fire detection, which is totally independent of any power source, both the detection and suppression system work even when the electricity supply is disconnected. This low-weight, low-maintenance Fogmaker system is simplicity itself and makes use of the purest extinguishant, water, combined with 3% Aqueus Film Forming Foam (AFF), to attack all three components in the fire triangle namely heat, oxygen and fuel. Russell states that “ We call this Fogmaker’s TRIPLE ACTION3 effect” Using high-pressure (100 bar) water mist, the system effectively suppresses the fire and cools down the compartment to prevent re-ignition, “The use of water in the form of mist (50-micron droplets) presents an additional firefighting benefit that no other fire-fighting agent has,” states Russell. “The significant number of droplets together with the large combined surface area effectively blocks radiant heat by absorbing and scattering of heat radiation and reducing damage within the engine compartment. High-pressure and consequently high discharge speed is required to ensure that the mist reaches the flames and pene¬trates the outward flows induced by the fire. The system is fitted with special high-pressure nozzles to ensure good penetration of droplets into the fire as well as efficient cooling and oxygen depletion due to the respective fast vaporisation and the expansion of vaporised droplets. The patented discharge piston allows for a complete discharge regardless of the orientation of the bottle either vertically or horizontally, leading to a versatile installation footprint. This, together with a compact, neat design, enables the system to be fitted in confined, internal compartments and out-of-the-way spaces offering protection against falling trees and branches and avoiding hindrance to general machine maintenance. As there is no powder or mess to clean-up after actuation, resetting of the released Fogmaker suppression system is simpler, easier, faster and more effective than powder or foam suppression systems. “After a discharge, it’s a simple matter of replacing the detector hose and refilling the piston accumulator, thus keeping costs and downtime to the absolute minimum for the end-user,” says Russell. The robust Fogmaker fire suppression system has earned a solid reputation for its high efficiency and proven reliability and according to Russell, the total life span cost of the system is significantly lower than comparative units. He also points to the fact that the system requires low maintenance, which is particularly important for the forestry industry which operates machines in remote areas. This not only eliminates the costs of frequent servicing but also increases uptime. Fogmaker SA is responsible for inspection and servicing of the fire suppression systems. Within the foresty industry inspections are performed at six monthly intervals at the customer’s site and are simple requiring approximately an hour and can be done at shift change. Servicing is required only every three years. The Fogmaker fire suppression system is designed and manufactured in Sweden in accordance to ISO 9001 and ISO 14001 standards and has obtained approval from the Underwriters Laboratories (UL) in the USA, the Swedish Fire Defence Association’s SBF 128 and Australia’s AS 5062 standard. The fire suppression system boasts an installed base of over 150 000 units in over 50 countries in Europe, the Middle East, Australia and the USA.