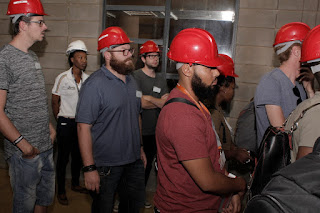 The Mine.D: Zero Harm hackathon, hosted by the Tshimologong Precinct and the Research Institute for Innovation and Sustainability (RIIS), has announced the three overall winners of the digitally-inspired hackathon. Focused on Mixed Reality (MR) and Internet of Things (IoT) within the health and safety space of the mining sector, the teams that entered were exposed to the wonders of technology, including demonstrations and one-on-one coaching from industry experts. Lesley Williamson, CEO, Tshimologong Precinct, says that the top three entries were inspiring and very relevant to the health and safety of the mining environment: “I was impressed by the depth of knowledge and skill of the entrants. As we hoped, the results address very real issues and concerns within the mining environment and all utilise technology in innovative ways.” While she says the judging process was not easy, the first place was awarded to team SystemDex (Sikhanyiso Ngetu, Mosima Matlhwana, and Menzi Mohlobo), which simplified big data into a mixed reality interface with an added feature of monitoring the health vitals of miners. By using a low-cost sensor system, they are able to track health and environmental management in real time. In second place was team SixUp (Aaron Tseke, Andile Mutono, and Gift Mogeni), which tackled rock seismic activity with a preventative warning system. The system is able to warn miners of rock movements and give them immediate insight into the potential danger of rock fall, depending on the speed and distance of the seismic activity. The third place we awarded to team Looksee.do (Dean Hodgskiss, Dylan Holshausen, Chris Behrens, Shaun Lottering, and Jaco Wilters), which solved health and safety training challenges through an affordable mixed reality method, costing a fraction of a traditional system. It allows miners to be trained in a safe virtual environment through a gamified system with in-built health and safety challenges to overcome. Highlights of the programme included, visiting a mock mine at the Wits Mining Institute as part of the immersive context setting. The mock mine takes the participants into a mock tunnel resembling those in underground mines. The tunnel led the participants to a 1.5 m high rock face, which shows how miners work underground. They got to experience the heavy equipment, narrow tunnels and potentially dangerous conditions miners work in. The participants also enjoyed being exposed to a mock control room, showing all the data that is collected in a mine. Participants also found the context sessions on Augmented and Virtual Reality and IoT to be very helpful. These sessions gave the participants a deeper understanding of how they can use these emerging technologies for digital innovation in the mining industry. A demo showing cutting edge mixed reality technology helped participants to tinker and contextualise the potential of the technology they were applying at the hackathon. The prizes for the Hackathan included a membership at the Tshimologong Precinct, mentoring from Mixed Reality and IoT experts and an introduction to the innovation and technology divisions at South African mining companies. Davis Cook, CEO, RIIS, says that Mine.D was an outright success: “Our aim was to use technology to address current issues and this was achieved. The teams developed some exceptional work and we are very happy with the outcome and potential of this type of hackathon.” Ends ________________________________________ About Wits University’s Tshimologong Digital Innovation Precinct Setswana for “new beginnings”, Tshimologong is Johannesburg’s newest high-tech address in the vibrant inner-city district of Braamfontein, where the incubation of start-ups, the commercialisation of research and the development of high-level digital skills for students, working professionals and unemployed youths takes place. The Precinct was launched in September 2016 with support from major companies including Microsoft, Cisco, Datacentrix, Telkom, ACSA and MMI. Gauteng Province through its Department of E-Government and the City of Johannesburg have also provided significant support. The Precinct also houses the prestigious IBM Research’s Lab Africa – one of only 12 such facilities in the world. Website: www.tshimologong.joburg About RIIS RIIS is the pioneering open innovation firm in South and Southern Africa. Driven by a single purpose – to consistently empower people, organisations and communities to innovate, and thereby to create a better world. They achieve this by rigorously understanding the long term strategic needs of partners, and working with them to design an innovation journey that is achievable, valuable, and fully supported. Beginning with the implementation of the first custom-designed platforms in South Africa, RIIS has delivered six open innovation platforms and completed over 100 open innovation engagements across South Africa, Namibia, and Zambia; and are currently in the design phase of an implementation for West Africa, based out of Lagos. ________________________________________ Issued by GinjaNinjaPR, please contact us for additional PR information and interview opportunities: Samantha Watt samantha@ginjaninjapr.co.za Kirsty Thompson Kirsty@ginjaninjapr.co.za 011 425 6290