Construction of a satellite city in Wakiso in Uganda 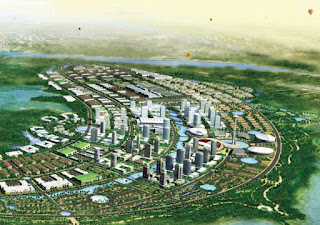 The Ugandan government has earmarked Nakigalala area along the Kampala-Entebbe highway for the establishment of a satellite city with an aim of decongesting the capital, Kampala. According to the State Minister for Urban Development, Mr. Isaac Musumba, Nakigalala will be the first ultra-modern city in Uganda with three more to follow. “In this Satellite city development plan, the government’s role is to identify the land and invite experts to work on the physical development master plan to allow for the construction of the buildings,” Mr. Musumba said. The Minister said that the government has invited a team of consultants seconded by the Malaysian government to plan for the satellite city adding that the actual development of the 1200 hectare land will be done by the private sector. “The government identified the land and spoke to the owner who are willing to sell to those investors who want to construct houses that are fitting the plan that will be handed to government by the consultant engineers. The government will not have to spend any money on land since the city will be built by private developers,” Mr. Musumba said. The satellite city’s master planning and designing process is being worked on by consultants from Malaysian Incorporated Services, Berhad which will consume an amount of US $2m; a grant from the Malaysian government. While opening a day’s interactive workshop between the Malaysian consultants and selected local technocrats, Mr. Musumba warned that government will not accept Nakigalala to be a ‘Chinese city’ by allowing only investors from the Asian countries to building houses at the expense of local investors. Ms. Norliza Hashim, the Director of Malaysian Incorporated Services Berhad who heads the consultancy team, said that the government of Uganda approached its Malaysian counterpart in assisting in designing the master plan for the Satellite city of Nakigalala. “The government of Uganda had sent officials to Malaysia and signed a memorandum of understanding in December last year and agreed to do the work in six months before the Master Plan is approved by cabinet in one year’s time,” Ms. Hashim said. Ms. Hashim added that Malaysia managed constructing different Satellite cities to relieve the capital Kuala Lampur of congestion and informal settlements because there were consistent policies towards implementing the Vision 2020 which came into force in 1991. On Uganda’s potential to pull off the project, Ms. Hashim said what is needed is to have a legal framework in place and ensure that it is being followed to implement the project. Ms. Hashim also said that Uganda’s Vision 2040 ‘will give hope for Uganda’ because it has strong plans that if implemented, the country will be moving in the same direction that Malaysia took to become a developed country in 30 years.