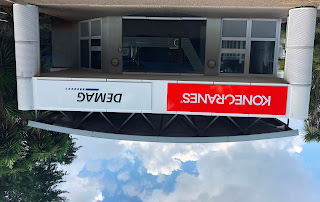 Following the worldwide acquisition of Demag Cranes by Konecranes earlier this year, South Africa took the lead internationally within the group with integrating their respective head offices as well as all the branches around the country. Konecranes moved from their base of ten years in Germiston to Demag’s premises in Atlas Road in Boksburg. “Moving 65 employees as well as factory equipment and machinery took quite some doing,” said John MacDonald, Service, Sales and Marketing Director of Konecranes. “Months of discussions with our counterparts and our staff were held to ensure the minimal disruption to their working as well as their private lives as for some the distance to travel to work became longer. For others the move to Boksburg was more convenient.” “We definitely surprised our colleagues in the rest of the world with the speed that we, in true South African fashion, ‘just got on with it’, MacDonald said. Konecranes is a major supplier to the mining industry in South Africa and sub-Saharan Africa. Their heavy-duty process cranes for the mining industry are able to carry extra-heavy and dangerous loads and are built to protect against corrosion from heat, dust, moisture and constant use. Konecranes has a range of cranes built to withstand Africa’s toughest environments. Currently, of the ten branches around the country, all have already combined premises. Along with the Gauteng branch, Cape Town moved from Killarney to Epping, whilst the Demag branches in Richards Bay and Durban moved to the existing Konecranes premises, as have the Witbank, Klerksdorp and Rustenburg branches. The branches in Port Elisabeth are moving into new premises in Greenbushes. Konecranes and Demag’s Head Office is now located at 60 Atlas Road, Anderbolt, Boksburg 1460, tel: +27 11 898 3500. Konecranes’ website remains the same, www.konecranes.co.za. “With the amalgamation of two giants in the crane industry, we are poised to become the undisputed leaders in the South African and sub-Saharan lifting industry,” MacDonald said.