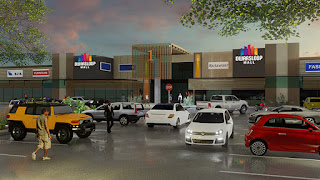 Architect’s impression of Phase 1 of Dwarsloop Mall. With an A-grade, 35,000m2 shopping mall being constructed by New Africa Developments in northeastern Mpumalanga, this festive season will see 33,000* households closer to a contemporary shopping destination. Dwarsloop Mall boasts more than 50 stores, anchored by Shoprite & Spar major grocery tenants and includes a selection of national fashion retailers, restaurants and banks. Committed tenants include Pep, Total Sports, Ackermans, Clicks, Sportscene, Markham, Roman’s Pizza, Exact, Cross Trainer and many more. Situated on the arterial R40 between Hazyview and Hoedspruit at the major Thulamahashe intersection, this green fields development is very prominent and has good access for the approximately 150,000* residents of Dwarsloop and Bushbuckridge, in addition to a large percentage of Thulamahashe locals. The R40 ring-road has been budgeted for by the local government in the 2017/2018 financial year, and by effectively bypassing Bushbuckridge will greatly reduce the notorious Bushbuckridge traffic congestion and stimulate tourism in the Lowveld. This will ensure Dwarsloop as the main thoroughfare between Hazyview and Acornhoek, further increasing visibility and shopper convenience. New Africa Developments’ CEO Japie van Niekerk: “This development will act as catalyst for the community, bringing shopping closer than it has ever been”. With the densely-populated surrounds, this market is severely underserviced, and this brand new mall will fill the daily shopping needs of the bulk of surrounding residents, for whom the closest alternative is 6km+ away, situated atop a mountain. Van Niekerk continues: “We’re employing award-winning architects, engineers and service providers to ensure a modern, state-of-the-art centre providing a city-like shopping experience for the local community.” Additional to Dwarsloop Mall, other major investments are planned in and around Dwarsloop, making it the key development node in the region. The 560-bed Mabuleng provincial hospital and a brand new SAB distribution facility, are major projects close to the mall, and are both already under construction. Building anticipation in the community, the developer is launching a logo competition in which locals can take part in the excitement of the new development by choosing the mall’s eventual logo from four pre-developed brand marks.