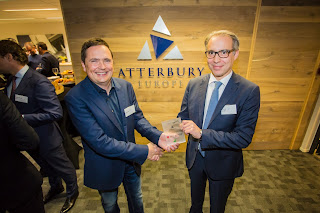 Chris van Voorden and Henk Deist CEO of Atterbury Atterbury Europe opened its new European headquarters in Leiden today. The South African property developer focuses on shopping centre investments and retail development opportunities in Europe. From the distinctive office building ‘Leiden Central Offices’, Atterbury Europe will expand its operations particularly in the Mediterranean and in the upcoming eastern European region. Expanding to Europe Over 23 years, Atterbury has successfully developed real estate across South Africa and on the African continent. Since 2014 they have expanded their activities into Europe, starting out in Austria and now concentrating operations in Leiden from where the development of prime commercial, retail and residential property in Europe is being effectively managed. The distinctive ‘Leiden Central Offices’ building is strategically located at the intersection of the historic centre with all its inner-city facilities and Leiden’s central train station. With only a 15-minute train ride, Amsterdam Schiphol Airport is in close proximity, making traveling throughout Europe easy and fast. Atterbury Europe’s CEO Henk Deist: “As our business grew into a meaningful size, we decided that from an economical and practical perspective our activities should be centrally headquartered in Europe. The Netherlands was chosen, not only for its competitive fiscal regime, but also for its access to top professional advisors and the fact that the Dutch use English as their main business language. We are five employees in the office, that is when we’re not travelling – four South Africans and a Romanian, on the lookout for the first local to join – we have enough space for growth!” Based in Leiden Deputy Major Robert Strijk of the City of Leiden: “We’re very pleased that Atterbury Europe is well aware of the attractive Dutch business climate and concluded that Leiden offers great opportunities. The city is an ideal, solid and hopefully prosperous basis from which they can expand their operations in Europe and I have no doubt the Leiden office will soon feel like ‘Die Klubhuis’ for their employees!” On behalf of the Netherlands Foreign Investment Agency (NFIA) and the City of Leiden, InnovationQuarter’s Director of Foreign Investments Chris van Voorden welcomed Atterbury Europe in Leiden. Van Voorden says: “The arrival of this highly rewarded South African property developer with an impressive track-record and portfolio, underlines our continuously improving business climate. We have noticed a growing interest from South African companies setting-up business in West Holland. Besides linguistic and cultural similarities, maybe also our direct approach in conducting business is a unique characteristic our countries share. With our partners, we are pleased to help Henk Deist and his team establish useful contacts and support them in their European growth ambitions.”