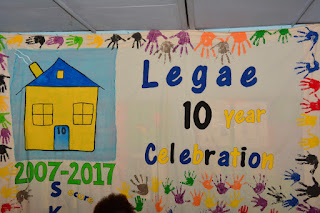 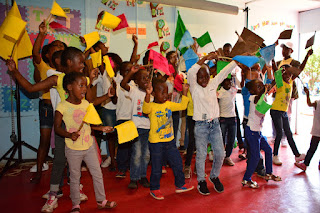 On 1 April 2017 the Legae Community Childcare Centre celebrated 10 years of providing assistance and schooling to children in the Daveyton area on the East Rand. SKF was there to celebrate with them. Partnering with St Andrews and St Marks Presbyterian Churches, SKF South Africa established Legae Community Childcare Centre in Daveyton on the East Rand in March 2007. 'Legae' which aptly means 'home', provides care to children suffering from HIV/AIDS but also comes to the aid of other disadvantaged children in need. In addition to a pre-school and a care centre for up to 50 children, there is also an after-care facility for twenty school-going children up to the age of thirteen. Attendance at Legae is free of charge and the Centre is mainly staffed by people from the surrounding community. Children receive two meals a day as well as snacks and the occasional food parcel is also provided which they can take home. The Centre ensures that the children receive basic medical services in co-operation with a local doctor as well as HIV education and resilience building. Several staff members have received training in play therapy and child counselling to ensure that the children receive professional care. The birthday celebrations were held in the Legae school room which became a hive of activity. The function was well attended by both Board Members, previous pupils and their parents, SKF staff members as well as congregation members from St Andrews and St Marks. Legae Project Manager, Christine Nel, took the audience on a ten year journey, proudly sharing some of Legae’s great success stories. Some previous students expressed just how much Legae had meant to them, providing the stepping stones that prepared them for their current lives at school and in the community. It was inspirational to hear how well these children are now doing in school with the majority making the top five list in their respective grades. Formal proceedings made way for socialising with parents and past students. It was heartwarming to watch the 2017 classes relishing in their party packs and having loads of fun on the jumping castle. The happy smiles on all the faces bore testimony to just how much this Centre means to the community. SKF South Africa looks forward to working closely with Legae in the future. Here’s to the next 10 successful years Legae!